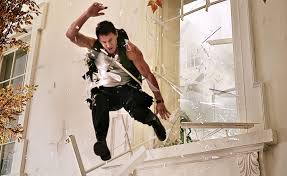 Plot: Afghan veteran John Cale (Tatum) brings his estranged daughter Emily (King) for a tour of the White House. Meanwhile, terrorists set off a bomb at the Capitol Building as a ruse to take the President (Foxx) hostage. Cale manages to rescue the President from the heavily armed invaders and together they roam the White House evading capture as they attempt to prevent Wold War Three from kicking off.

As Zoolander’s maniacal fashion mogul Mugatu might say, Channing Tatum is SO HOT right now! Tatum plays man of the hour John Cale in Roland Emmerich’s latest outing ‘White House Down’. Emmerich has a penchant for eviscerating the President’s House, doing so most recently in the disaster movie 2012, in which an ocean liner came crashing down on upon it.  This is the first time he has set a film inside the White House, though unfortunately he was not the only one with the idea. Earlier in 2013, ‘Olympus Has Fallen’ was released, probably followed by a sinking feeling for the cast and crew of ‘White House Down’ considering that the plots are exactly the same. Happily for all those involved, ‘White House Down has turned out to be the superior of the two.

This film is essentially ‘Die Hard in The Whitehouse’, so if you’re not a fan of John McClane and his crazy anti-terrorism antics then steer clear of this. CIA security man John Cale takes his daughter (Joey King) to the White House in an effort to impress her and make up for his long standing absenteeism. Their guided tour is cut short when a team of ruthless mercenaries break in and capture President Sawyer (Jamie Foxx- channelling a caricatured Obama), who they need alive for their nefarious plot. Throwing a spanner - and a few grenades - into the works, John Cale manages to elude the attackers and take the POTUS under his protection. Chaos follows both inside and outside the White House; national security goes haywire and CIA official Finnerty (Maggie Gyllenhall) struggles to organise rescue attempts that are continually thwarted by RPG wielding terrorists.

Tatum is on top form here as Cale, though at certain points he is so clearly aware of his own presence and devastating looks that he might as well give a wink to the camera. This loss of immersion is most acute during a one way argument with a squirrel. (While that may sound pretty nuts, it’s still nothing compared to Mark Wahlberg’s interrogation of a plastic plant in ‘The Happening’). Jamie Foxx is brilliant as the Commander in Chief, and it’s a shame he can’t be in the White House in real life too. Cale’s eleven year old daughter is played by up-and-coming actress Joey King. She puts on a spirited if mildly obnoxious display but ultimately her role is just too hefty.

An awful lot of effort goes to waste setting up insignificant support characters and sub-plots. It is over half an hour before any shots are fired and the dialogue up until this point is shoddy and self gratifying. Rather than cleverly weaving references throughout the film,  Emmerich plays up insignificant details so that he can show them off later with a great deal of fanfare, as if to say ‘HEY! We talked about that before at an earlier point in the film! ISN’T THAT CLEVER HOW WE BROUGHT IT BACK?’ Timing proves to be an issue for the final act too, which is extremely drawn out and full of unmoving ‘reveals’.

While there are many problems with this film, it contains a good deal of thoroughly enjoyable action. Outrageously large and improbable explosions will put a smile on your face. Best of all are the villains. You get to meet them as characters and not just vessels that propel the storyline. Knowing one of the bad guys has diabetes and is thus unable to eat cake somehow enhances the experience of watching him shoot security guards with an assault weapon. Amusingly, when the invaders make a sweep of the White House (which they do with shocking ease, a bit like playing Call of Duty on ‘Recruit’ difficulty) every single guard manages to let go an ‘ARGH’ as they fall, in spite the bullet that just passed through their brain.

While ‘White House Down’ may be too long for some, it is worth your time if you enjoy the sort of things mentioned above. It’s no ‘Die Hard’/’Under Siege’, but Tatum/Foxx make for a formidable duo; if you are forced to choose between this and ‘Olympus Has Fallen’, choose this.