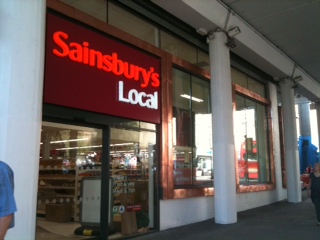 A new, smaller, pricier Sainsbury's opens up on the Ladbroke Grove. Do we really need it?
Over a year ago, rumours abounded about a Tesco taking over the property where the Liquid Nation bar once stood. Then the Westway Trust, who owns and manages the site, dismissed these rumours as laughable... Now we have a Sainsbury's...which is neither funny, nor needed or wanted.
In the article we published here on the 12/04/10, we were told:
In response to your recent email about the bar on Ladbroke Grove, we have seen the notices put up on the gates over the weekend, and we rolled around with laughter at the fertile imagination of the author. If Tesco had ever heard of the site, I expect they would be laughing too.  It is a complete fantasy . We have never even spoken to Tesco, or any of their rivals.
...humm, someone is definitely having a laugh here...
The area has plenty of supermarkets already, from the Tesco in Portobello, to the Sainsbury's at the top of the Ladbroke Grove. In between these two locations and by the area taken, there are several other small supermarkets and local shops. The last thing needed was another supermarket, that is also pricier then the one up the road.
One can not avoid but think that these big chains with huge pockets enforce their way through communities under the cover of free market and choice. Plus the fact that the same brand is only 0.6 miles away with more  products and considerably cheaper.
Martyn Freeman, the Chief Executive of Westway Development Trust had this to say:
"The Westway Development Trust funds its charitable operations through the rents from its commercial property portfolio. The Local authority does not fund us, central government does not fund us, and private individuals do not fund us. We have to make for ourselves all the money that is spent on delivering our charitable objectives, and we do recycle all of our income into charitable purposes.
The site on Ladbroke Grove was specifically purchased by the Trust to be developed for commercial return. The bar that occupied the site became unable to pay the rent , and closed, leaving us with empty premises, which were marketed by letting agents as restaurant/bar/retail . In the event, after many months of being empty, the best offer made to the Trust was from Sainsbury’s, and letting a unit to them gives us the assurance that rents will be received for years to come.
Trustees are ONLY permitted to let commercial property on the best available market rental and terms, which has to be certified by an independent Chartered Surveyor. This is a legal requirement for all charities, and therefore cannot be ignored.
However, although the Trust is mindful that some residents have ideological objections to chain supermarkets , many others have expressed their pleasure on seeing the arrival of a Sainsbury’s Local in this area , so we do not believe this is a retrograde move.
As regards your concerns on delivery movements, I understand you may want to learn more about this, but this is an operational licensing issue managed by the local authority, so I will have to refer you to them for answers. I would say that the previous bar certainly caused some disturbance, as I am sure all of the other shops do. Ladbroke Grove is ,of course, a designated retail street in the Borough Plan , and I would expect Sainsbury’s to be a responsible operator of the premises. I hope now you understand the background to this transaction. There never was a Tesco interest in the site, that was an urban myth put about by the bar as a smokescreen for their closure, and the letting to Sainsbury’s was accepted though an arms-length marketed letting . I appreciate we may never get you to support our choice of tenant, but I hope the position and motivation of the Trust is clearer.
Many thousands of local residents benefit each year from the many community initiatives the Trust funds and runs, and none of this would not be possible without a strong and reliable rental income from our properties."
Martyn Freeman - Chief Executive Westway Development Trust 19/07/11
However, strong objections have been voiced, among them, Westway Dot Tee Vee said in a facebook group: Sainsbury's will suck all the trade out of the immediate area. Expect a lot of empty premises over the next 18 months - 2 years, then the 'upmarket' stores will move in. And all those laughing now will be crying as their rents go up & they won't be able to afford to live in grove anymore... don't say you weren't warned.
What do you think?

#1 Mark 2011-10-01 08:19
We haven't only got plenty of large and small supermarkets in the area, but also a great fresh & prepared food offer available on the market stalls in Portobello and Golborne Roads, as well as the new Portobello's Premier Farmers and Fine Foods market (not sure whether Westway is thinking of this as a charitable operation or a commercial property). However, as a hard-working local resident I must say this new outlet's opening times have got me wondering why it's so difficult to buy food past a certain hour and at weekends around here!
Refresh comments list
RSS feed for comments to this post
JComments