Good Times in the Park with Norman Jay 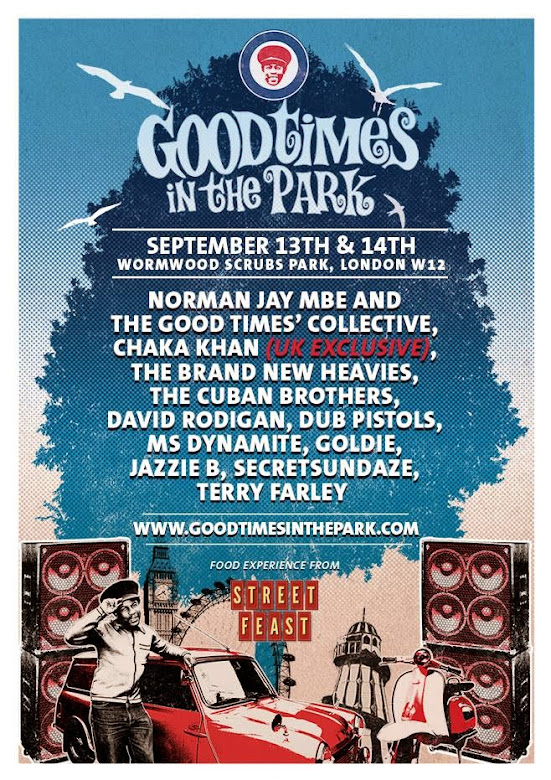 GOOD TIMES IN THE PARK

Norman Jay MBE and his brand new festival, Good Times In The Park, has just announced its brilliant first round of artists performing this September in London. Taking place outside of the Notting Hill Carnival for the first time in their 30 year history, this is a momentous time for Good Times – the festival is a whole new chapter in their illustrious musical history.

Taking place over Saturday 13th and Sunday 14th September, Good Times In The Park will be the biggest and best Good Times party ever held, set over three stages. Norman has handpicked the lineup, featuring iconic music pioneers from club and festival culture.

Norman says: “I am really excited with the names we can announce now, and there are lots of amazing artists to be revealed soon, who will make this an incredible festival. The response to Good Times In The Park has already been overwhelming, with messages of support from all over the world, and I feel genuinely humbled by this incredible show of support for what we are creating. Trust me, what we have got planned is going to really amaze everyone, there are some heavyweight names to come.

“We are creating something which will take Good Times to the next level. The festival will feature live stage entertainment, club deejays and will support exciting young British talent – everything we and our loyal fans would clearly embrace and enjoy at a Good Times event. We look forward to welcoming you all to our biggest adventure yet in the land of music!”

Chaka says: “I am thrilled to be performing at Good Times In The Park with Norman Jay at his new festival. I love London and the UK and can’t wait to be a part of this event!”

Part of festival’s emphasis is also focusing on supporting new talent with the Good Times seal of approval. Jamal Edwards’ SBTV will be working with Norman to select the acts and will be hosting the Spotlight Arena over the weekend.

Norman has enlisted Street Feast, the nomadic street food circus, to provide the food experience across the festival. Street Feast has taken London by storm since launching two years ago. They have raised the bar for food traders with a pioneering format of amazing food, good vibes and beautiful stalls.

Norman will be inviting Carnival Troupes to join the party across the weekend. Any troupes wishing to come and enjoy the festival and take part both dancing on the stages and across site should contact This email address is being protected from spambots. You need JavaScript enabled to view it.

Good Times In The Park is a fully inclusive weekend event, embracing community vibes and carnival party atmosphere for all ages. Good Times has been a staple part of Notting Hill Carnival for over 30 years and do intend to return in the future.

This September it is all about bringing the Good Times to Norman’s very own festival!